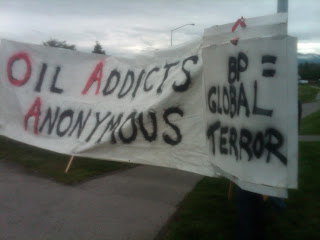 July 20, 2010
Anchorage, AK
Alaska BP Headquarters
Oil Addicts Anonymous and Alaska's Big Village Network gathered with Alaska citizens at Alaska's BP Headquarters to protest the US Congress's addiction to oil-lobbying money by Big Oil. The action was in solidarity with a broad coalition of Gulf of Mexico residents, public interest, faith, environmental and human rights groups in Washington, DC. Three months after British Petroleum's Gulf of Mexico Deepwater Horizon's toxic gusher, hundreds of citizens gathered in Washington, DC, to tell Congress to recognize; and to end their dirty oil addiction in order to move toward a just renewable energy future.
BP spent $1.72 million lobbying in the second quarter from April to June of 2010, while Shell Oil increased lobbying spending by almost 75% from the first quarter of 2010 to fuel Congress's oil addiction at $4.05 million in the second quarter. [ www.huffingtonpost.com/news/bp-oil-spill ]
As with all major addictions, it will take local, national and international community efforts to end Congress's oil addiction. We are asking energy legislation that protects peoples, fisheries, communities and the planet Earth.
Josh of Oil Addicts Anonymous says, "BP is one of the most obvious oil addicts around, and their addiction is hurting everyone. Especially, with the oil spill from Deepwater Horizon rig. Oil Addicts Anonymous supports BP's efforts to end their addiction by capping more wells. We would like to congratulate BP on attempting to cap the Deepwater Horizon well in the Gulf of Mexico. It's a step in the right direction for an oil addict, but there are many more wells in Alaska and around the world that could threaten to do more community damage and harm, so we are asking BP to cap more of their wells and end their oil addiction."
Alaska's Big Village Network is concerned about the massive increase in Shell Oil's lobbying efforts to drill in the Arctic Ocean, where the interest of the nation should be focused on protecting and enhancing Alaska's fisheries and local indigenous peoples in the interest of regional, national, global and local food security. Particularly, with the huge chemical poisoning of nearly half of America's fisheries in the Gulf of Mexico. Carl, Yup'iaq biologist, explains, "western scientist are only beginning to understand the significance of the Arctic to biological production in Northern regions and planet Earth. The last of the great wild salmon fisheries on planet Earth depend on the Arctic and sub-arctic ocean nutrient cycles. As America's fishery habitat dwindles, why should Alaskans let Big Oil threaten our fish, people, indigenous cultures, and national security for foriegn markets and a few short term jobs?"
Posted by AK Big Village