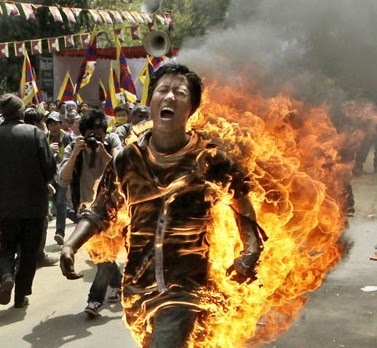 This letter is to notify you of the ongoing matter of China’s violations of Human Rights against Tibet and her peoples. As China increases the iron fist of tyranny, and continuing to force the extreme conditions of genocidal nature against the people of Tibet, I would like you to take note of current events of significance of humanitarian concern.

Tibetans and their supporters have been peacefully protesting the extremely violent acts of China in many forms, not limited to Tibetan’s protesting in self-immolation. The Tibetans peacefully burning oneself to death underscores the significance of Tibetan independence and freedoms in their history as a distinct People with their own culture, religion, language, and land. Most of the self-immolations have been occurring within the Chinese occupied boundaries of Tibet as an understatement to the harsh Chinese government oppression of young Tibetans to practice their own religion, speech, and language. I also would like to note that China is continuing to arrest Tibetans and bringing them to forced labor camps in Tibet and around China.

Yesterday, March 26, 2012, the 30th Tibetan set himself on fire in protest against the unbearable regime China is waging against Tibetan freedoms; to breaking many of the international covenants and treaties of Human Rights upon which the United States is signatory. This event is significant because it is only the second to occur in India where there is a growing community of Tibetan exiles.

The young Tibetan man was in Delhi, India. He had already escaped the borders of Tibet and could live in relative safety, freedom and good conditions in India. Still, Jamphel Yeshi, a healthy powerful educated young man, decided to burn himself, by his own hands to exemplify the suffering occurring by Tibetan people.

Senator Begich, as a representative of the Alaska’s people, full of merit and elected, in a country that is built on human rights, please use Your powerful voice to promote the cause of Tibetan independence.

Just consider the 30 individuals who burned themselves: They were ready to die. How much damage could have been inflicted upon others if they were terrorists like many other peoples on this earth. Tibetans are examples from the future of civil conscience and respect for life.

If we let them down, we are letting down the whole human race.