No Donlin Gold Mercury Mine in Alaska: A mega mercury “gold” mine with a list of problems financed by Barrick Gold and Nova Gold 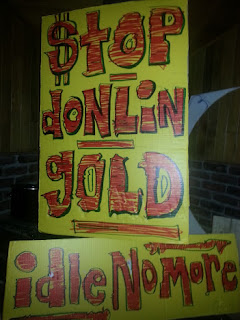 No Donlin Gold Mercury Mine in Alaska:
A mega mercury “gold” mine with a list of problems financed by Barrick Gold and Nova Gold

Alaskan Tribal Communities, Yup'ik fisherpeoples and environmental groups warn Donlin Gold -- "No mercury poison in our waters and in our bodies!"
A group of concerned global citizens, indigenous peoples and Yup'ik fisherpeoples are demonstrating opposition to the proposed Donlin Gold mine in the Kuskokwim watershed.  The Army Corps of Engineers is holding a Donlin Gold Environmental Impact Statement public meeting in Anchorage, Alaska, today.  The groups have concerns about one of the world's largest proposed mega-gold mines whose 16,300 acre wetland footprint extends into the Alaska marine transportation corridor.

This mine will bring enormous cost to water, fish, wildlife, peoples and migratory animal pathways with massive amounts of contaminants such as mercury, arsenic and selenium, that will permanently leach into the Kuskokwim watershed. ["Dirty Metals: Mining, Communities and the Environment," A report by Earthworks and Oxfam America, 2004]

Donlin Gold is equally owned and supported by Barrick Gold Corp. and Nova Gold Resources.  Barrick and NovaGold both have a history of contaminating peoples' water supply on a global scale.

“Center for Water Advocacy (CWA) is concerned about the Human Rights implications of a mine of this scale to the amount of water that is withdrawn out of stream that would otherwise be used for subsistence purposes,” says Harold Shepherd of Center for Water Advocacy. “Furthermore, there exists the potential contamination of drinking water and subsistence food resources.”

NovaGold has a history of mishaps in Alaska including the complete shutdown of the Rock Creek mine in Nome, Alaska, in which "streamlined permitting" killed 2 workers and resulted in terrible planning for the water balance of the mining operation in 2007-8.[“Rock Creek Mine Problems,” report by Center for Science in Public Participation, April 2012]

Alaska Inter-Tribal Council (AITC) is concerned about the worst-case senario of a dam failure or barge accident along transportation routes that would lead to catastrophic releases of contaminants and toxic substances in the environment which impacts hundreds of villages along the transportation route.

“Shell's Kulluk grounding accident shows us the vulnerability, risks and threats to tribal communities that hunt, fish, gather, and harvest marine and aquatic subsistence resources along the coasts and inland waters,” says Delice Calcote, Executive Director of AITC. National Congress of American Indians has a resolution opposing development of the Donlin mine as it threatens Alaska's indigenous peoples traditional means of subsistence and implicates violations of international law. [National Congress of American Indians Resolution #NGF-09-005]

Acid Mine Drainage (AMD) is also a major concern of these groups in the proposed Donlin Gold mine. AMD can cause severe health, reproductive and developmental impacts to living organisms; including humans. Some of these concerns have been discussed extensively in the EPA's draft Bristol Bay Watershed Assessment of the Pebble Mine project.  In addition, Donlin proposes to install a 313-mile, 14-inch gas pipeline from Cook Inlet to the middle of a Kuskokwim wilderness area, an area with no infrastructure.  The municipality of Anchorage predicts a Southcentral Alaska natural gas supply crisis in Cook Inlet region by 2014.

The groups are calling on Anchorage and Southcentral Alaska residents to get involved in the Donlin Gold EIS to oppose this badly planned mine that threatens Alaskans' air, water, land, animals and future generations.
###end end###