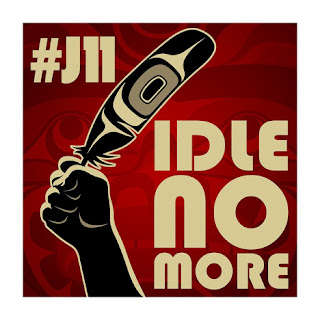 (ANCHORAGE) The Idle No More grassroots protest movement that started in the province of Saskatchewan has stretched across Canada and is now being joined by Alaskans who are concerned about the threats to Alaskan waters and salmon from British Columbia’s (BC) aggressive industrial development plans. Indigenous Peoples and supporters will host an Idle No More rally at Town Square Park downtown Anchorage at noon on Friday, January 11th.

“We would like to show solidarity with our indigenous brothers and sisters in Canada that are facing the same issues our tribal peoples are faced with here in Alaska,” said Delice Calcote of Alaska Inter-Tribal Council. “Our mission is to protect customary and traditional use of our subsistence resources. Protect our subsistence or expect resistance.”

This demonstration is more than just a show of solidarity with Indigenous activists in Canada. Participants are also hoping to raise awareness about the fact that BC’s major industrial development plans and drastic changes to Canadian environmental laws also pose serious risks to salmon, water quality and traditional uses in the Southeast Alaska/Northwest BC transboundary region.

Carl Wassilie of Alaska's Big Village Network said that “Native and non-native Alaskans need to stand up and be counted when it comes to protecting our water, salmon, and indigenous people’s rights. Our representatives are shirking their responsibilities and largely ignoring the threats to our resources from Canada’s massive rush to industrial development in the headwaters of major salmon rivers like the Taku, Stikine and Unuk and weakening of important environmental protection laws. History tells us ignoring this is a bad idea.”

The Idle No More movement was sparked by changes to laws that protected all of Canada’s “navigable” waterways and that govern Indigenous land tenure. Recent changes to the Environmental Assessment Act, Fisheries Act and Navigable Waters Protection Act mean there will be substantially less federal oversight over decisions about major industrial developments, such as the many mines, roads and hydro-electric projects that are proposed on the BC side of the border. Many of these projects would have direct impacts on rivers that provide drinking water and salmon to Alaskans. The most recent changes are but part of a larger pro-industrial development agenda that is being implemented without meaningful consultation with the Indigenous peoples of Canada.

“Federal oversight of mining in Canada hasn’t been perfect, but it has played an important role in reducing risks to the environment,” said Ramsey Hart of MiningWatch Canada. “Recent weakening of environmental regulations is taking us in the wrong direction, which increases the threat that poorly planned and risky projects going forward on a massive scale will pollute Alaskan waters, harm salmon and threaten the livelihoods of Alaskans who depend on these resources. Alaskans have reason to be concerned about what’s proposed in the headwaters of rivers like the Taku, Stikine and Unuk.”

BC mining operations have a history of polluting U.S. waters. For example, acid mine drainage from the Tulsequah Chief mine has been leaking into the Tulsequah and Taku rivers for over 50 years. Pollution from a smelter in Trail, BC ended up in Lake Roosevelt, in the Washington state portion of the Columbia River.

“The BC government and the mining industry have shown little regard for downstream interests in Alaska,” said Chris Zimmer of Rivers Without Borders. "The double whammy of massive industrial development and the gutting of environmental laws is the biggest threat to water quality and salmon in major transboundary wild salmon rivers like the Taku, Stikine and Unuk we have seen in decades. We need our elected leaders to immediately engage with Canada to ensure that Canada’s actions do not harm our interests.”