Despite only having a few hours to put together comments on the on-going extreme environmental racism saga of the Cook Inlet Beluga Whale and Alaska Native hunters, I was able to scramble up what I saw missing in the 289-page plan.  Despite the government taking over 10 years to finally come up with a plan after spending 30 years blaming Alaska Native hunters and creating massive regulatory controls on hunters, they have finally created a plan.   All this is while the Cook Inlet Municipalities, Boroughs, Military and Industries all have free reign to dump sewage, anit-freeze (airports), munitions, oil, drilling fluids (including radioactive materials), etc. 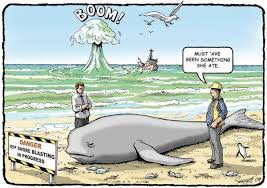 The list goes on and on for allowing "Progress and Development" to continue in Cook Inlet, while the most restricted group of peoples are local indigenous peoples, whom the government blames for Beluga population declines. while they ignore their own laws on pollution and egregious dumping in the Beluga birthing grounds.   This shows folks what is really to come in the Arctic as we continue to allow American laws and regulations to be bypassed for "progress and development" of the "last frontier".

Here's a few words in the saga addressing the most racist environmental case in Alaska: 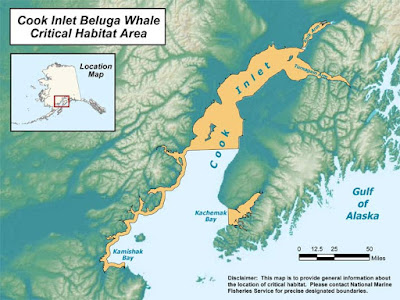 Thank you for this opportunity to comment on this extremely important document regarding Recovery of the Cook Inlet Beluga Whale (Beluga) that indigenous peoples of Cook Inlet have been gravely concerned about since time immemorial.   Cook Inlet Tribes have developed Recovery Plans for the Cook Inlet Beluga Whale as the National Oceanic and Atmospheric Administration (NOAA) listed the Beluga under the federal Endanger Species Act (ESA).  The inter-tribal ordinance for the Recovery is included in the Cook Inlet Marine Mammal Councils minutes in 2005. [ORDINANCE 042005-01] 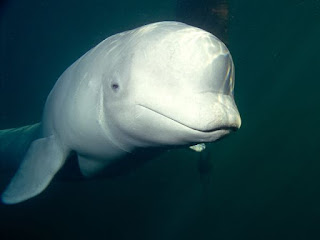 The National Marine Fisheries Service Draft Recovery Plan for the Cook Inlet Beluga Whale (Beluga) fails to provide a full picture of historic, ongoing threats and potential catastrophic effects within the full seasonal ranges of the Cook Inlet Beluga Whale.  The missing pieces in this plan includes the Beluga’s migratory pathway and the food species for the Beluga that also migrates outside of the “feeding” areas and “birthing” areas that are threatened.  The Beluga and the species the Beluga feeds on are all traditional food sources for thousands of indigenous peoples and multiple cultural groups in the Cook Inlet and North Pacific Regions.
Due to the timing of the public comment period during fishing season and summer activities on the land and water, many local fisher-peoples and indigenous communities have not been able to comment.
Additionally, the 289 page document can be overwhelming for indigenous communities whose English is limited and proficiency may be lacking.   The effects of the decimation and continued decline in the health of the Cook Inlet Beluga Whale is a concern to all indigenous peoples that historically traded beyond NOAAs scope and regional Tribal outreach that should include across mountain passes to the West and to the North as noted by Shem Pete’s historical analysis.
I have broken my comments based on my indigenous perception of the NMFS Draft Recovery Plan into 3 categories of missing information:   Military, Oil spills, Earthquakes

The Navy is completely left out of the entire document despite the historic, ongoing and potential threats and effects on the Beluga recovery.   Especially important is identifying the effects of military sonar on all living organisms.
As recent as May 6, 2015, the city of Cordova, Alaska, passed a resolution “to oppose Navy Training Exercises in the Gulf of Alaska in June 2015.”   Eyak Preservation Council protested on May 16, 2015, with over 100 boats and hundreds in a peaceful demonstration against the Navy's planned live fire training activities in the Gulf of Alaska. 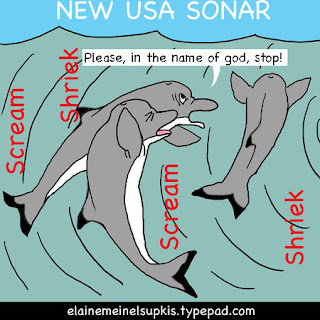 According to the EIS preferred plans, these "war games" will involve use of high frequency and mid-frequency sonar for submarine exercises, plus a wide variety of live weapons and explosives deployment - bombs, heavy deck guns, torpedoes, missiles, large carrier strikes (ships blown up & sunk) none of which will ever be recovered. Although military training exercises have been conducted in the GOA intermittently for the last 30 years, those proposed in the current EIS are a massive increase from any conducted before
(e.g. a 6,500% increase in sonobuoys).

The Navy has applied for permits to conduct training exercises in the Gulf of Alaska (GOA) for up to 42 days (from April to October) annually for a five-year period. The National Oceanic and Atmospheric Administration (NOAA) is the permitting agency with support from the National Marine Fisheries Service (NMFS). The Navy is required to complete a supplemental EIS (to be released 01/2016) that included a 60-day comment period from August to October of 2014. The Supplemental EIS will be for the next round of permits (2016 – 2021). Previous trainings for 2010 – 2015 were permitted, yet no trainings have been conducted yet. 2015 is the first year these trainings will take place.”

B.       Oil spills
Exxon Valdez Oil Spill (EVOS) has had significant effects and continues to harm the North Pacific Ecosystem.   EVOS has had short-term and long-term impacts that continues to directly affect food availability of multiple species for the Cook Inlet Beluga Whale.   Indigenous Science and Knowledge confirms some of the results of ecosystem science completed over the years on the Gulf of Alaska and effects of the EVOS.
The chronic discharge of oil and hazardous substances by the oil and gas industry over the lifetime of activities in Cook Inlet still has yet to be examined comprehensively despite organizations such as Cook Inlet Keeper insistence to evaluate “authorized” discharges into the critical habitat of the Beluga.

C.       Earthquake- 1964
The 1964 Earthquake was an extremely catastrophic event in Cook Inlet that was completely left out of the Background of the Recovery Plan and was significant for a multitude of reasons.   The 1964 Earthquake not only changed the physical habitat and altered some of the localized nutrient cycles.   Toxic chemicals and damaged infrastructure also leaked into Cook Inlet and Gulf of Alaska from the 1964 Earthquake.