Celebrating a colonial holiday?  The hypocrisy of the Declaration of Independence? 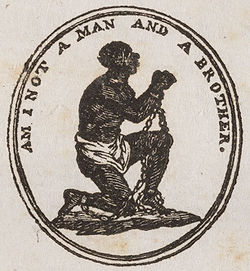 In today's post, we will highlight Frederick Douglass, [c. 1818-1895] a former slave and eminent human rights leader in the abolition movement.  Douglass was the publisher of the "North Star," after he became a "freed" slave in the North.  The motto of The North Star was "Right is of no Sex – Truth is of no Color – God is the Father of us all, and we are all brethren."

The goal of the abolitionist movement is the immediate emancipation of all slaves and the end of racial discrimination and segregation; of which, today is linked to anti-oppression movements globally and is the work of Alaska's Big Village Network in the Arctic.

Frederick Douglass brilliantly reminds us of important narrative of history as he busted out of the savagery of colonial slavery and speaks Truth to the matter of Justice and Freedom.

Many of Douglass' points resonate with my soul today in the savage veil of "Alaska Native" policies that  literally regulates Alaska Native peoples in to submission to unjust and unfair rules and regulations and goes against the basic principles of the Declaration of Independence on July 4, 1776.  One of the vectors of unjust illegal policies is the "extermination" of Alaska Native peoples, and exclusionary US legislative practices of restricting fiduciary responsibility to Alaska Tribes.  Most of the Human Rights implications occur through unjust plenary practices of the US Congress through provisions of the Alaska Native Claims Settlement Act [  http://scholarship.law.duke.edu/cgi/viewcontent.cgi?article=1013&context=alr ]
The current practice of excluding Alaska Tribes inalienable rights is highlighted by recent amendments by US Senator, Lisa Murkowski, restricting Alaska Native victims suffrage in the Violence Against Women Act.  [ http://www.indianlaw.org/safewomen/violence-against-native-women-gaining-global-attention ]

I briefly touched on this in previous blog post as well; such as "Yupik Human Rights violated: Subsistence Fishing" [ http://akbigvillagenetwork.blogspot.com/2013/02/posted-by-gary-patton-february-2013-i.html ]


I'd like to share some important points of Douglass' speech in his 4th of July Oration in a New York day of July 5, 1852 that he summarily called "The Meaning of the July Fourth for the Negro".
[ http://www.historyisaweapon.com/defcon1/douglassjuly4.html ] 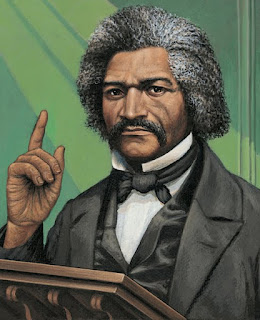 The Meaning of July Fourth for the Negro


"....Oppression makes a wise man mad. Your fathers were wise men, and if they did not go mad, they became restive under this treatment. They felt themselves the victims of grievous wrongs, wholly incurable in their colonial capacity. With brave men there is always a remedy for oppression. Just here, the idea of a total separation of the colonies from the crown was born! It was a startling idea, much more so than we, at this distance of time, regard it. The timid and the prudent (as has been intimated) of that day were, of course, shocked and alarmed by it..."

"....On the 2nd of July, 1776, the old Continental Congress, to the dismay of the lovers of ease, and the worshipers of property, clothed that dreadful idea with all the authority of national sanction. They did so in the form of a resolution; and as we seldom hit upon resolutions, drawn up in our day, whose transparency is at all equal to this, it may refresh your minds and help my story if I read it.

"Resolved, That these united colonies are, and of right, ought to be free and Independent States; that they are absolved from all allegiance to the British Crown; and that all political connection between them and the State of Great Britain is, and ought to be, dissolved."

"....Fellow-citizens, above your national, tumultuous joy, I hear the mournful wail of millions! whose chains, heavy and grievous yesterday, are, to-day, rendered more intolerable by the jubilee shouts that reach them. If I do forget, if I do not faithfully remember those bleeding children of sorrow this day...."

"...What, to the American slave, is your 4th of July? I answer; a day that reveals to him, more than all other days in the year, the gross injustice and cruelty to which he is the constant victim. To him, your celebration is a sham; your boasted liberty, an unholy license; your national greatness, swelling vanity; your sounds of rejoicing are empty and heartless; your denunciation of tyrants, brass fronted impudence; your shouts of liberty and equality, hollow mockery; your prayers and hymns, your sermons and thanksgivings, with all your religious parade and solemnity, are, to Him, mere bombast, fraud, deception, impiety, and hypocrisy-a thin veil to cover up crimes which would disgrace a nation of savages. There is not a nation on the earth guilty of practices more shocking and bloody than are the people of the United States, at this very hour...."

"....Behold the practical operation of this internal slave-trade, the American slave-trade, sustained by American politics and American religion...."

The sin of which it is guilty is one of omission as well as of commission. Albert Barnes but uttered what the common sense of every man at all observant of the actual state of the case will receive as truth, when he declared that 'There is no power out of the church that could sustain slavery an hour, if it were not sustained in it....' "

"...Allow me to say, in conclusion, notwithstanding the dark picture I have this day presented, of the state of the nation, I do not despair of this country. There are forces in operation which must inevitably work the downfall of slavery...."

To further address the principles of the revered USA Declaration of Independence that stands as a pillar to Justice and Freedom in which "all men created equal" is paramount to the "We the People" Constitutional finality in 1789.  The US Constitution was ratified 12 years after the Declaration of Independence against the Tyranny of British subjugation. 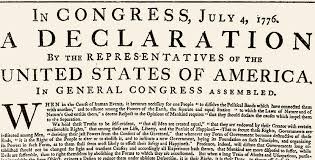 CONTINENTAL CONGRESS, July 4, 1776. The unanimous Declaration of the thirteen united States of America,

When in the Course of human events, it becomes necessary for one people to dissolve the political bands which have connected them with another, and to assume among the powers of the earth, the separate and equal station to which the Laws of Nature and of Nature's God entitle them, a decent respect to the opinions of mankind requires that they should declare the causes which impel them to the separation.
We hold these truths to be self-evident, that all men are created equal, that they are endowed by their Creator with certain unalienable Rights, that among these are Life, Liberty and the pursuit of Happiness......
"....The history of the present King of Great Britain is a history of repeated injuries and usurpations, all having in direct object the establishment of an absolute Tyranny over these States. To prove this, let Facts be submitted to a candid world.....He has excited domestic insurrections amongst us, and has endeavoured to bring on the inhabitants of our frontiers, the merciless Indian Savages, whose known rule of warfare, is an undistinguished destruction of all ages, sexes and conditions."
[ http://www.archives.gov/exhibits/charters/declaration_transcript.html ] 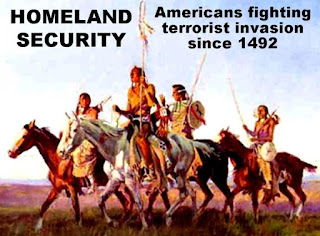 The Declaration of Independence—Except for 'Indian Savages'-  by Adrian Jawort

"....Jefferson is most credited for penning this famous document, it was written by a committee of 5 people – including Benjamin Franklin and John Adams – and ratified 86 times by the Continental Congress before becoming official and signed. So this was a carefully mulled over phrase in that Natives would forever be considered “savages” in regards to their future relations with the U.S....."


It's tough to take the opinions of those deemed a lesser “merciless Indian savage” serious, apparently—much less honor their treaty rights. When the brutal history and unfair treatment of Natives is brought up in the Redskins controversy, it seemingly elevates patronizing attitudes toward American Indians' arguments. “Just get over it,” is a dismissive phrase frequently said. But how can American Indians simply “get over it” when the primary founding document of the U.S. still condescendingly refers to them as a “savage” to this day?
----  Adrian Jawort is a proud Northern Cheyenne writer living in Montana 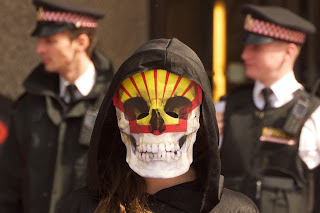 Defend our Coast.  Protect the Arctic!

sHell is  a global bully violating international Human Rights policies and United States laws and regulations that were enacted to protect American resources and American coasts.
[ http://humanrights.foundationcenter.org/cases/holding-corporations-accountable-shell-in-the-niger-delta/ ]
The US Government is bypassing and exempting its own laws like the Oil Pollution Act of 1990, Clean Water Act, Clean Air Act, and a slew of Security Acts that were designed to protect Americans from threats to our National Security and National Interest from exploitation from threats like Royal Dutch Shell.

Alaskans and People of conscience are standing up to protect and defend the Peace and Security of HUMANKIND against the government and societal tyrants oppressing Alaska Native Peoples, which include international criminals such as sHell oil company.

The principles of the Revolt against British colonialism that gave birth to the USA in 1776 must be upheld by all citizens for Life, Liberty and the Pursuit of Happiness.   Today, Alaska's Big Village Network is overcoming complacency by the governments and uprooting oppressive systems that allow foreign companies like Shell to exploit America's resources and harm Arctic indigenous peoples. 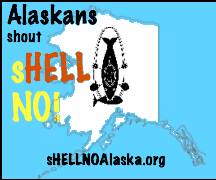 British profiteers running a company called Royal Dutch Shell must be turned back from the Arctic. Stand UP America! The Revolution to free ourselves of oppressive British control is still continuing in the Arctic. Defend our Seas and Humanity.

ShellNo! Alaska mosquito Fleet rise up! Defenders of our Seas are uniting for Earth! Patriots of Liberty are here!